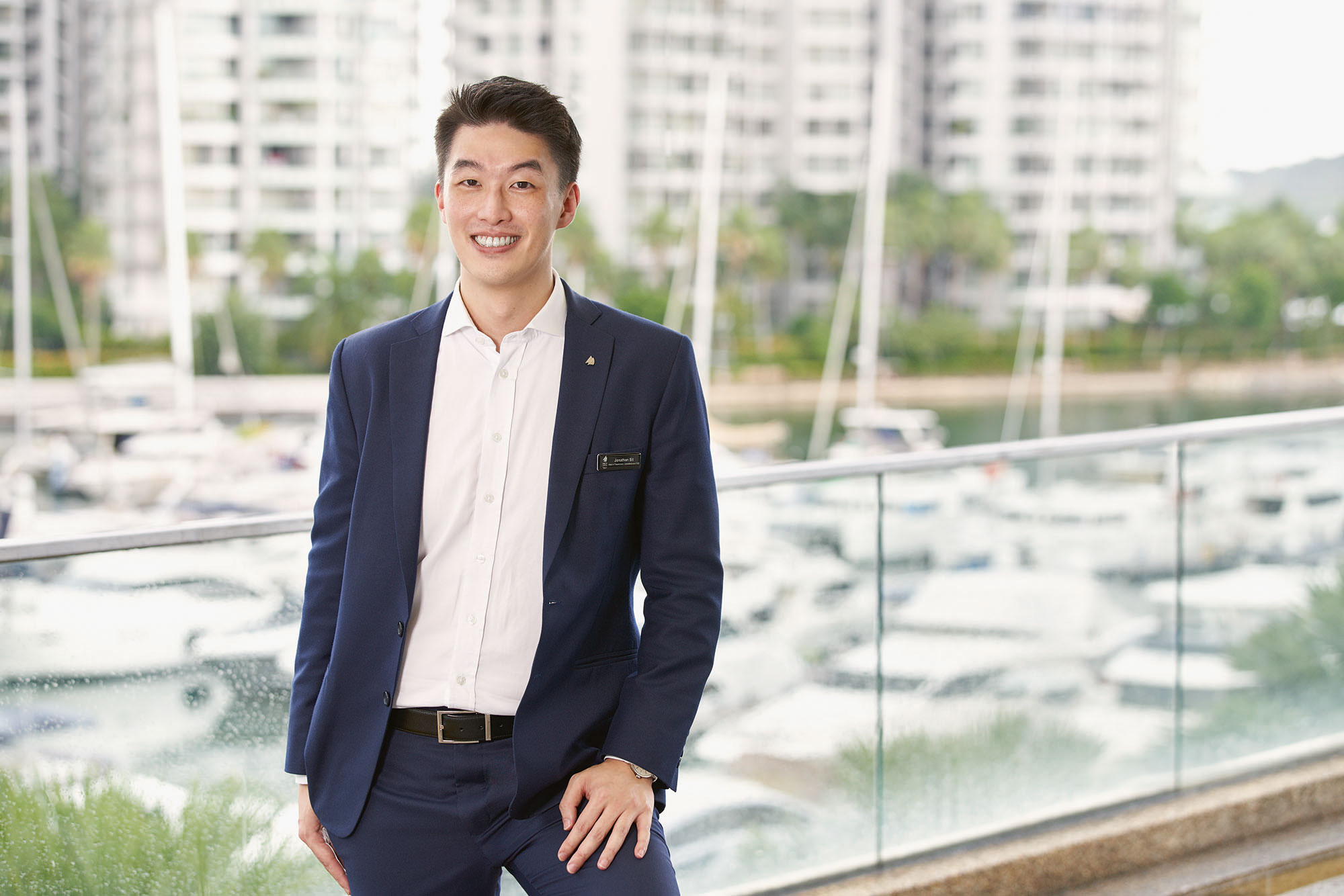 The original article was published on the Sep-Oct’20 issue of Longitude, ONE°15 Marina’s Club magazine. Read it here.

His curious nature and passion for challenges have held Jonathan Sit in good stead through his journey at ONE°15 Marina Sentosa Cove.

How do we innovate? How do we keep changing? How do we stay relevant? “These are my biggest challenges,” says Jonathan Sit.
A certain restlessness coupled with an uncompromising focus on the end goal have not only directed him in life, but also accelerated his career growth at the marina—Jonathan is now the Acting General Manager of ONE°15 Marina Sentosa Cove (previously, Head of Operations and F&B), having taken over from Teo Joo Leng who has assumed a global role with SUTL Group.

A native of Hong Kong, Jonathan’s love affair with Singapore began when he was pursuing his degree in Hotel Management from Cornell University, New York. Inspired by the Singaporean friends he made during his four years there, Jonathan first visited Singapore while still studying. “I loved it so much that I decided I would come back here and work for a couple years once I graduated,” he says.

Couple of years extended to many more, a job at ONE°15 Marina Sentosa Cove and a permanent resident status in the country.

Jonathan started his career at the marina on a humble note, as a management associate.
But it gave him a crucial opening into the nuances of a world he knew nothing about. During that time, he was also recruited to work on the contracts secured by the marina’s then-start-up, ONE15 Management and Technical Services, and grow the team from the ground up.

The learning curve was steep to say the least, but a great mentor and colleague, coupled with enormous personal determination got him through.
Jonathan’s resilience surely paid off, and he moved on to other departments, and became head of F&B, catering, rooms and operations departments. By the time of his new promotion, Jonathan was leading a large team of over 100 staff across nine teams.

SAY NO TO STATUS QUO

Compounding constant innovation with niche organisational identity, traditions and cultures have always been Jonathan’s focus.
More so in a case such as the Club, which caters to a specific clientele day after day, as against that of a hotel, where that is ever changing. So whether it was overseeing the re-branding of the Chinese restaurant, WOK°15 Kitchen, or reinvigorating Boaters’ Bar by shifting the focus to a different target group or curating lifestyle events such as Durian Party and Eyes to the Front summer parties at the rooftop—optimal use of resources and unblemished service to Members have been key.

Under Jonathan, Boaters’ Bar has not just become a choice hangout for boaters after a day at sea for conversations and quality ale, it is where a lot of business discussions are held and transactions are made—what with its live-screening of sports events, $6 drinks promotions and sell-out Trivia Nights.

As for the changes he initiated in the restaurant menus, Jonathan was also coming from a sustainability standpoint.
“I believe in the general concept that you consume less than you contribute,” he says. “It takes so much energy and resources to bring one carrot onto your table and we are just throwing things without thinking if it is terrible for the environment. Thankfully, the chefs and I have always tried to reduce costs in terms of food wastage, and we’ve been very lucky that we’re quite accurate in terms of forecasting what we need.”

Implementing changes and innovation are things Jonathan relishes most in his job, along with the friendships he has developed.
“I’ve worked with a lot of people in the company on a very hands-on basis during my management associate days and at all different levels. This gives me a unique opportunity to see exactly the stress points and bottlenecks, because I was there doing it with them,” he says. “They also trust me a little more because I’ve been in the trenches with them, so to speak.”

From being a complete newcomer to an exciting new promotion, Jonathan has come a long way.
Yet, he can never forget the first time he set foot into the Club. It was in late 2013, the day of his interview when Chairman Arthur Tay convinced him to consider a career in the marina industry. “I was really driven by his vision and intrigued that someone would giving me this opportunity without any prior experience and two years to just learn all about it,” he says in all earnestness.

By the looks of it, the Chairman’s foresight and trust were not misplaced, and this might very well just be the beginning.