The original article was published on the Sep-Oct’20 issue of Longitude, ONE°15 Marina’s Club magazine. Read it here.

Protecting the world’s oceans is all in a day’s work for this young yacht captain and green activist.

Mar Casariego profers a wide smile as she invites us into her abode, the 54-m yacht Ocean Warrior, which she captains for the Netherlands based marine conservation group Sea Shepherd. The research and patrol vessel is currently docked at ONE°15 Marina Sentosa Cove for maintenance works. Being able to house yachts of up to 200ft makes makes the marina a favourite berthing spot for owners and captains. Besides the Ocean Warrior, the marina was also home briefly to superyachts such as Batavia and Latitude.

We move to the bridge for the interview with Casariego sitting ensconced in the captain’s chair.

It is hard not to immediately warm up to the Spaniard, yet Casariego’s friendly demeanour and diminutive build belie a steely resolve to play her part in safeguarding the world’s oceans and its marine life. The 27-year-old is strongly passionate about sustainability, and leads a crew comprising mainly volunteers to fight illegal fishing around the globe. It is a calling that stems from a deep-rooted love of the sea spanning years; her first name itself, “Mar”, is Spanish for “ocean”.

Casariego was born in Palafrugell, a municipality located north of Barcelona. Her father, an engineer by profession, was the lighthouse keeper for her village. Fuelled by a diet of books detailing adventurous trips to faraway lands, the younger of two siblings (she has an older brother) started sailing as a child, joining her dad on expeditions and later landing a job as a sailing instructor in her teenage years.

The international law and human rights studies university graduate soon decided to chart her course to larger vessels. Casariego started working on superyachts as a crew member, and took a year off after her studies to traverse the globe and “learn a bit more about the world”. “I love to be at sea and have always been involved with volunteering and the environment, so I thought it would be a good idea to travel and volunteer at the same time,” she declares.

It wasn’t long before she heard about non-government organisation (NGO) Sea Shepherd and its work thwarting Japanese whaling ships in the Southern Ocean; famously the subject of Discovery Channel’s reality TV series, Whale Wars. “I decided to apply (to join Sea Shepherd), and they accepted me,” she says. “It was kind of the perfect time.”

Casariego started out as a deck hand even though she already had a captain’s licence and prior maritime experience. “You usually come on board as a deck hand so you have time to learn about the ships and the way Sea Shepherd works,” she says. The diligent Casariego showed her mettle and was promoted to the position of first mate after just one month.

Today, as master and commander of the Ocean Warrior, she oversees the vessel’s campaigns, its crew (who incidentally are all vegan), and navigation. “We focus on any type of threat to the world’s oceans, from marine pollution to illegal fishing to protecting marine reserves or helping governments to start new marine reserves,” she says.

Being out on the open waters, Casariego has witnessed her fair share of worldly sights and sounds. She revels in the natural beauty and fauna of places such as South America and the islands of the Archipiélago de Revillagigedo. “They have the most amazing marine life, huge Pacific manta rays, and one of the biggest populations of hammerheads in the world,” she enthuses. 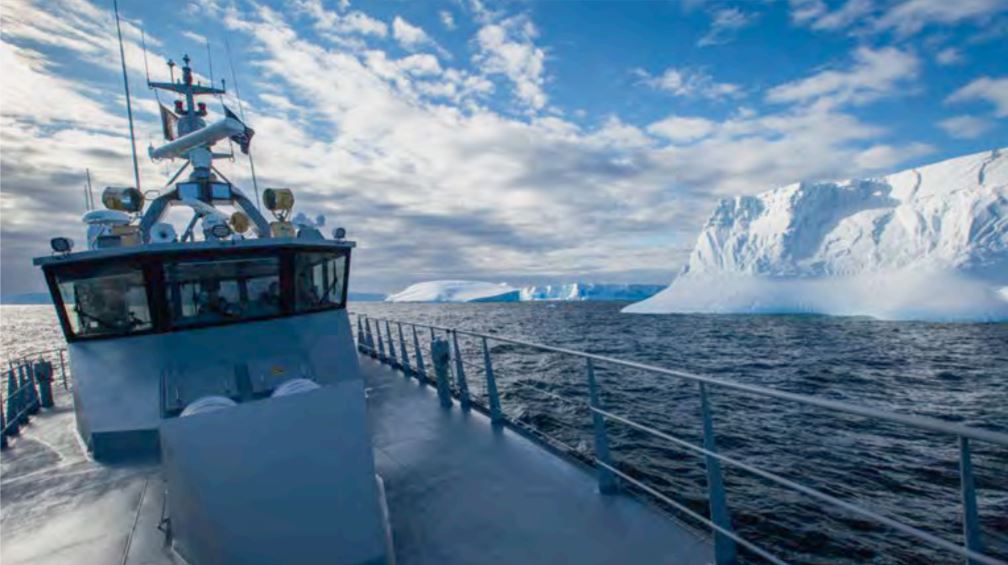 In Singapore for the first time, she is amazed by the fact that she can “get lost” in one of the citystate’s many lush green spaces and still be in “one of the most high-tech cities in the world”. Being vegan, her dietary choices here are more diverse, too. “It’s really nice to be in Asian countries, because tofu is part of the (normal) diet.” And incidently, the tofu in Singapore, she says, is unlike any other she has tasted before.

However, not everything she encounters on her travels is as pleasant. She laments over the destructive effect illegal fishing has on marine stocks, the environment and even humanity. “Trawling, for example, is one of the most destructive ways of fishing. The net just catches everything that is in its path, and it destroys the seabed. The algae cannot recover and that kills everything else because without algae, the whole food chain is affected.”

Compounding matters is the human element, specifically the exploitation of improverished communities. “Due to their situations or low incomes, many people are forced to become fishermen, and they get onto boats that don’t give them a place to sleep, or proper food, or a healthy number of hours of work,” she says. “They are not treated well, and not allowed to contact their families or go back home. This is a huge problem that we are supporting by buying fish.”

Yet Casariego fights on, doing what she can to fulfil her vision of a brave new world with recovering oceans and thriving marine life, her youth and gender notwithstanding. “I get lots of surprised faces,” she laughs. “When we arrive at a new port and a person asks for the captain and I go down, they say, ‘But I want to speak with the real captain’.” However, her team knows who’s boss. “I am really lucky with my crew. They are very respectful and understand that anyone can be captain as long as they have the right certification and the right attitude.

“Knowing that every day I am at work, be it maintenance on the ship or being out on campaign, goes towards something I believe is good for the world is an amazing feeling,” adds the self-described “perfectionist”, who practises yoga on board to keep herself fit. “I’d like to think that all the struggles I go through because I am a woman are helping all the girls behind me who want to become captain someday.”

NO EFFORT TOO SMALL: CAPTAIN MAR CASARIEGO ON LIVING SUSTAINABLY

1. AVOID SINGLE-USE PLASTICS.
“A future without single-use plastics would be a big thing. The amount of plastic I’ve found everywhere, even in the most remote places, is just unbelievable.”

2. TRAVEL JUDICIOUSLY.
“I try to travel in a conscious way. I will travel by bike instead of taking a car, if I can car pool, I will. If I can go by train instead of taking a plane, I will do that. I always try to pick the option that has the least impact on the Earth.”

3. CONSUME LESS.
“Society pushes us all the time to buy more things and own new things, but we really don’t need them. It actually makes us more stressed. This is something I really learnt about on ships, because when you are out at sea you don’t have supermarkets, you don’t have shops, and you can’t even buy online because you don’t have an address to send your purchases to. We can be as happy and enjoy ourselves as much as we do now without buying things.”

Read more on how we can do our part and start from young with these simple eco-friendly tips.

A WATCHFUL EYE: NGO SEA SHEPHERD, IN A NUTSHELL

Sea Shepherd was founded in June 1977 in Vancouver by former Greenpeace activist Paul Watson. Its work chasing Japanese whaling fleets propelled it to global prominence, before it switched focus in 2017 to thwart illegal, unreported and unregulated fishing practices such as shark finning, illegal by-catch and fishing without a licence. The NGO shares its expertise and resources, namely its 14 vessels and 160 crew, with various governments globally in a bid to combat such illicit maritime activities.